My weblog is hosted in a Git repository on Github. Github is bought by Microsoft, and now Github provides integration with Azure and its pipelines for build and deploy. This integration can be enabled through the Azure Pipelines app at the Github marketplace.

After setting up and configuring the Azure Pipelines app for your Github account move over to https://dev.azure.com. In the new configured Azure DevOps organization you can setup new projects.

There are no build pipelines configured yet.

When creating a new build pipeline the first question is: where is your repo. In my case the repo is hosted on Github.

Authorize yourself, and select the repository to use in the deployment. The final step is to configure the build pipeline. This is done though a YAML file called azure-pipelines.yml that will be stored in the root of the Github repository. Because the project to deploy is a Node application the information in the documentation Build, test, and deploy JavaScript and Node.js apps in Azure Pipelines describes the possible configuration settings that can be made. 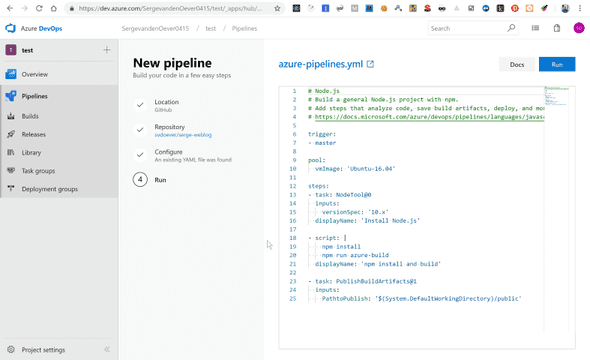 In the above build pipeline configuration there are a few important elements:

The following step is the release pipeline for deployment of the build artifacts to the the static website.

This release pipeline is triggered by a new build result, and requires only one task in the stage that is renamed to To static website.

Import in the configuration of the Azure File Copy task is that the we need to take the source files from the drop folder and copy them to the container $web.

One issue with the static web sites on Azure storage is that they support http only. This can be solved using an Azure CDN as described in Tutorial: Use Azure CDN to enable a custom domain with SSL for a static website.

My first take on selecting a CDN was taking the Microsoft standard CDN. The issue that I faced was that when I updated an article the CDN did not reflect these changes. Expiration of items on the CDN are controlled by Cache-Control headers as explained in the article Manage expiration of web content in Azure CDN. Because I’m running from a static web site hosted on Azure blob storage I don’t have a web server in between where I can control these headers like I can do on for example IIS. The other CDN offerings on Azure (Verizon, Akamai) give you more control to override caching based on for example file extensions. I first tried the Verizon offering which let you control these settings in a separate and incomprehensible “manage” interface. After struggling for a while I tried the Akamai offering of the CDN which has the Azure management screens as described in the above mentioned article so I could make all pages cache for 1 minute except for .js, .css and .json files which get a new unique url after each site generation and can be cached fr a year.

The CDN for this weblog is running on https://svdoever.azureedge.net. The custom domain name www.sergevandenoever.nl points to this url.